September 13, 1963 was the day of the second important victory of the liberal faction at the Second Vatican Council – when new Pope Paul VI named four Cardinal-moderators with broad powers, three of whom were liberals, securing and reinforcing by that the liberal dominance at the Council. Now, we come to the time of the collapse of the USSR.

Interestingly again, that one of the main persons, who, around the US President Ronald Reagan, defeated USSR in the final stage of the Cold War, British Prime Minister Margaret Thatcher was born on the “Fatima date”, October 13, 1925.

Events that directly led to the collapse of the USSR – Gorbachev’s arrest, the unsuccessful attempt of a coup d’etat by Communist hard-liners, confrontation in Moscow, etc. – happened during the days of August 19-21, 1991. But, the day of the Independence of Russia (from the USSR, now hypocritically renamed simply – the Day of Russia) is celebrated on the day of June 12 (not the 13th, but the day before it). That may be an allusion of Heaven, that the conversion of Russia nevertheless is not completed.

Really, can we say, taking into account all these historical events that happened on such character dates, that the “Fatima Epoch” has finished and belongs to history only, as some people say? Now, I come to the second part of my lecture, in which I will speak about the subject of “conversion of Russia”.

This part is a continuation of the speech by Stanislav Protasenko. His speech was made during a conference in Moscow. On the 4th and 5th of November 2017 in Moscow (Russia), Fr. Shane Pezzutti and faithful of the SSPX in Russia, co-operating with the Fatima Centre, organized a Conference about Fatima in Moscow. 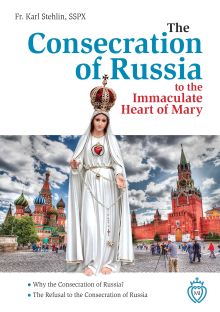